Making a Big Difference in the World

During his senior year at East Guilford High School, Terrence Holt helped lead his team to an 8-3 record – the school’s best mark in 20 years. He won All-Guilford and All-Region honors as a defensive back for three years and was also a star on the basketball court, scoring 1,786 career points and breaking the school record previously held by … his brother Torry.

Terrence followed in his older brother’s footsteps, attending NC State. But he also carved out a much different niche for himself. Terrence set records as a safety and on special teams, blocking kicks against some of the best college football teams. In his first game, he blocked two punts vs. Texas, enabling NC State to upset the favored Longhorns. During his career with the Wolfpack, Terrence blocked seven field goals. In 2001, he blocked four, which tied the national record.

Terrence was drafted in the fifth round by the Detroit Lions, where he played for four years as a defensive back before joining the Arizona Cardinals. He also played stints with the Chicago Bears, Carolina Panthers and New Orleans Saints before his retirement from the NFL.

“This is what I tell the kids at Football Camp. Attitude is everything. Be positive, work hard, and get involved in more than football.” 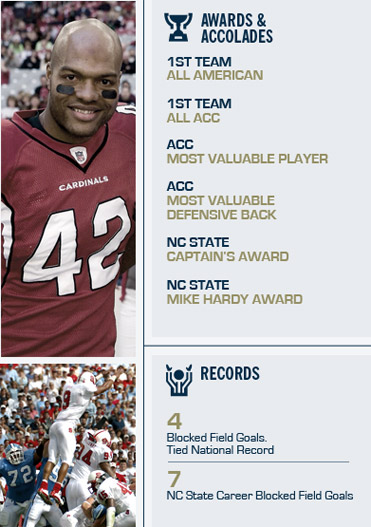